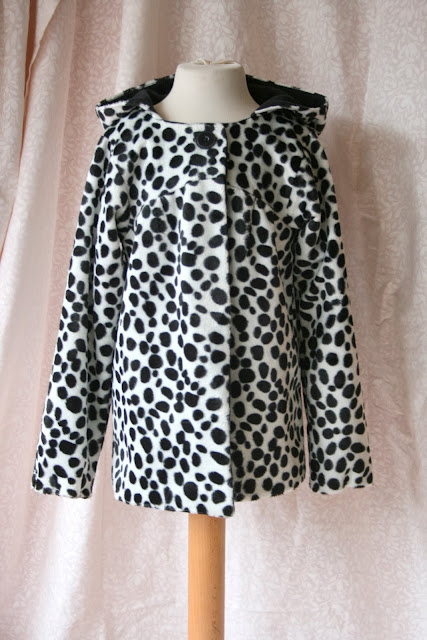 The school play this year came with the instructions 'Your child is Dalmation number 22, please dress in black and white spots.' Well a big fat YES to that! I knew immediately what I wanted to do. I have been looking for an excuse to make this, the Big Uptown Girl Jacket from Make It Perfect.

I had no idea where I would find a suitable spotty fabric and looked at a few sites before finding this beautiful soft Dalmation print velboa fabric from Minerva Crafts. It is ridiculously soft and actually feels like you are stroking a pet. It is furry but has quite a flat pile, making it easier to work with.

I ordered a meter of 58" wide fabric and had plenty of room to lay out the pieces for the jacket and also for the additional Winter Hood from Little Things to Sew, which is at the bottom end of this post. Without even thinking I have contributed to my tally for the Cover to Cover challenge!
The hood is for a classmate of my daughters. I am glad of the excuse to use up the spare scraps of fabric as I wouldn't have known what to do with them otherwise. 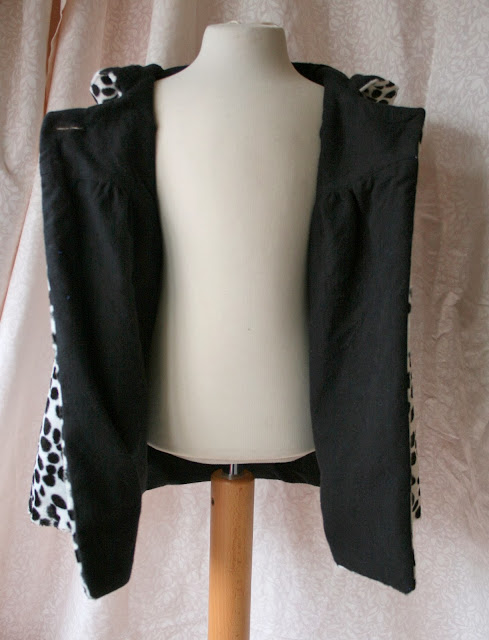 The inside of the jacket is plain black flannel. It gives the inside that snug, soft feeling which I hope to replicate in a jacket for me one day. I am quite envious of my daughter when she snuggles into this!

I followed the pattern faithfully and didn't run into any problems. I chose not to do the topstitching around the jacket edge because I didn't want to distort the pile of the fur. There is topstitching around the hood, but it was all I could bring myself to do. I felt it was important to have a hood that didn't tickle as she will probably have the hood up for the concert performance. I haven't added the ears yet. Actually I don't know whether I will. The ears that I drafted from the Winter Hood pattern looked far too small. I suppose it is fair to say I am undecided as to whether I will make some up. Lets just see what time I have spare!

I was a bit sceptical about my machines ability to sew a buttonhole through this fabric. It has a track record of screwing things up. I sensibly practiced a few times on some scraps. The recommended buttonhole for furry fabric was a keyhole shaped one. I tried that and my machine got stuck and created a big lump of overworked thread in one spot of the fabric. I consulted the manual again and tried a different one. Better but still a bit dangerous to be trying on my finished piece. I lowered the tension and tried again. After a bit of tinkering, I discovered that a very low tension of 2 (I usually have my machine on 5) worked a treat and produced a safe, tidy button hole. Phew! 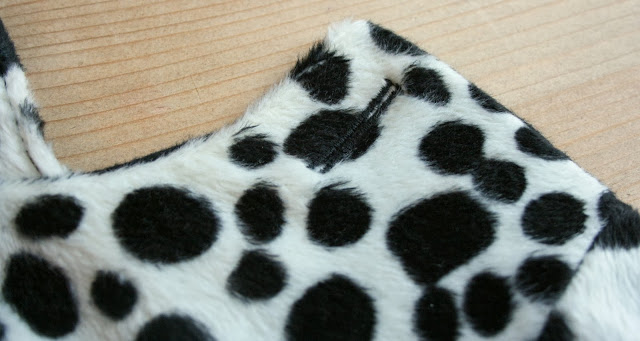 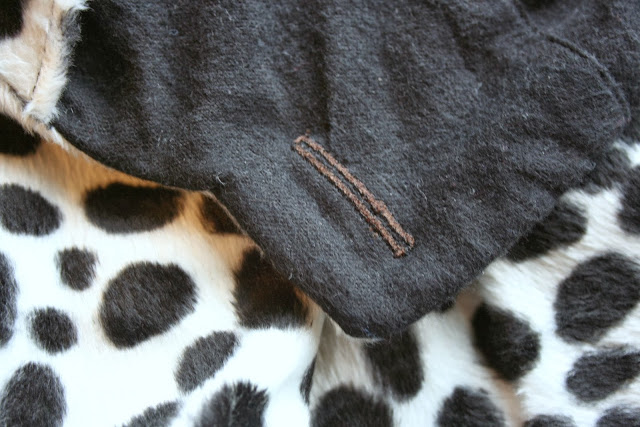 (yes, by this point in construction I had run out of black thread in my bobbin. Nobody will notice this minor detail though - hopefully) 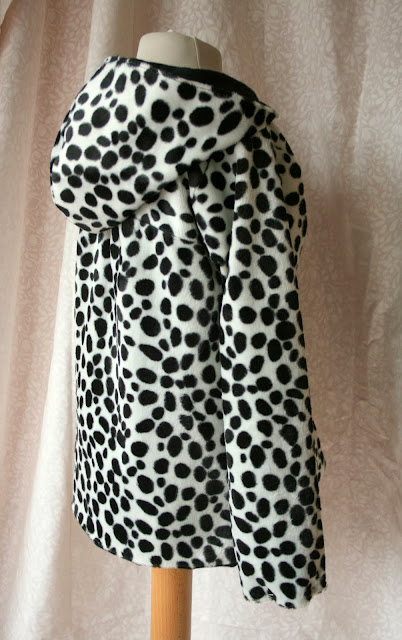 I chose to handstitch the sleeve edges together as it wouldn't have looked good to have a topstitching line around the wrist edge. 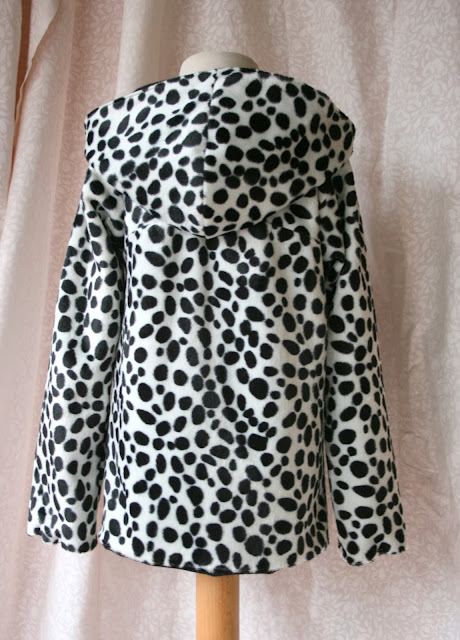 This is my first animal print jacket. I can't help but think it is a bit trashy, but all for a good cause. She loves it! I may or may not let her out of the house in it for a trip to the supermarket. 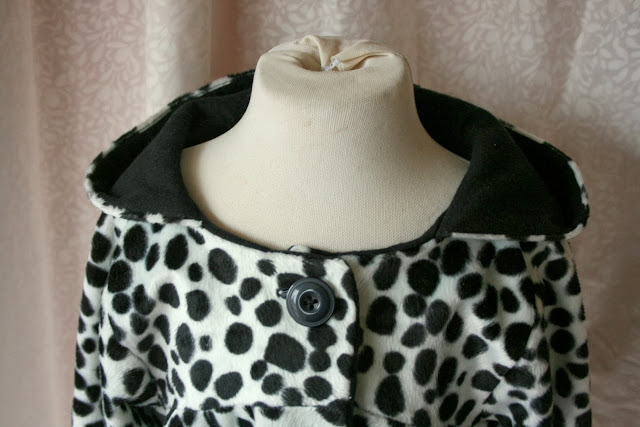 That brings me on to item number two. This is for her friend R who is also in the play. I ran out of the black flannel for the lining and so used a (now retired) work fleece of my husbands. This fleece is the thickest fabric known to mankind. I was amazed when I was cutting into it. It must be a good quarter inch thick. Needless to say, it makes for the type of hat you want to burrow into on a cold day. 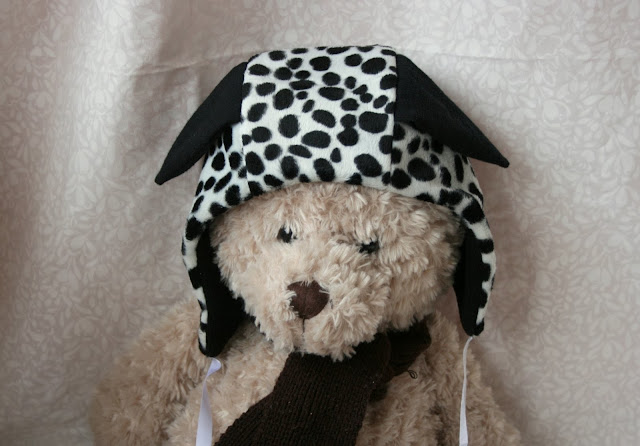 I had ordered black ribbon to go with it. It was the only thing not to arrive and has been lost in transit somewhere. They say it has been dispatched, I haven't received it. There is a postal claim in process.... yada yada yada... so I had to use the only thing to hand which was white. I don't really like it and may take it off. I will leave the decision to the friend who is wearing it.

Spots are incredibly hard to photograph and I had to remember to hold my breath whilst pressing the shutter button because everything kept blurring. So when worn on a moving model, the odds of getting a decent shot were slim. Teddy up there did a good job but I did manage to get one properly modelled shot that doesn't make you think you are visually impaired. 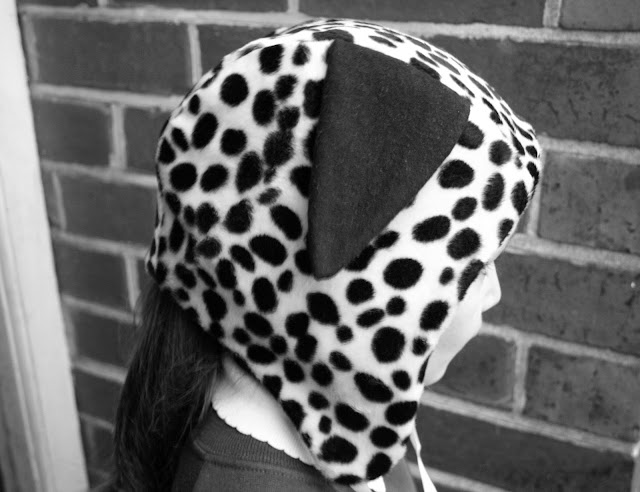 Just when you thought the costume theme was over, oh no, there is one more to sneak in. This is for a Circus Day.

My daughter wanted to be a jester. I really liked the idea and thought I would make a basic onesie and go from there. Somewhere along the way it became a clown outfit. I ran out of puff. No other excuse. 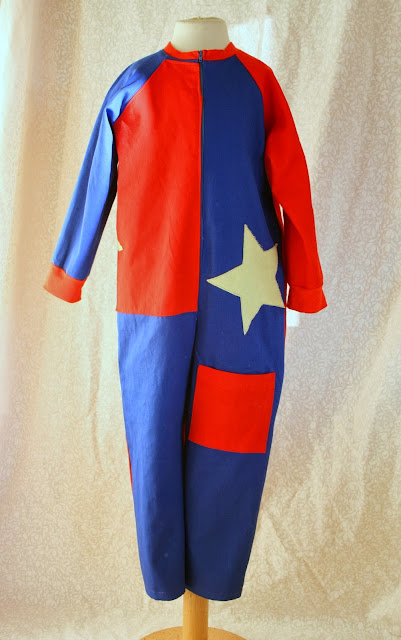 The pattern is a bedtime sleeper from a Simplicity pattern I have used before for pyjamas. Simplicity 9853.

The construction was really quick and simple. There is a zipper down the front and knit rib fabric for the cuffs and neckline. The stars are appliqued on out of a gold fabric that was kindly donated. The red square on the front leg is the patch pocket borrowed from the Oliver and S School Days Coat. It was a perfect size. 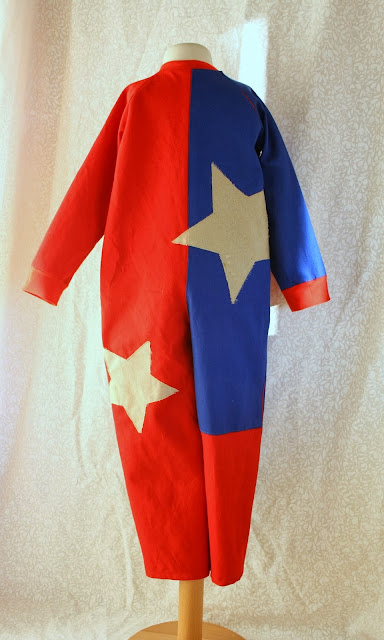 I added 3" extra length to the legs and it looks like a great fit.

Funny story: I had it on the dress form like the photo above and had left it in my daughters bedroom. It has been there for a couple of days and I had forgotten about it. My husband had been away for two days and didn't know it was there. We were doing bath time and he walked past our daughters bedroom, which was in darkness and nearly jumped out of his skin! All he saw out of the corner of his eye was a small figure dressed in a clown suit standing in the corner of the room.

Well, I have apologized for leaving it there, and for my tears of laughter. He has now recovered from his 'I see dead people' moment. The outfit is now in the wardrobe!